I don’t blame you if you’re initially skeptical about the notion of a martial arts and health arts center helping you attain lasting peace of mind and real spiritual awakening. Maybe you’ve taken some classes in yoga or tai chi at a health club or fitness center but you learned little more than physical movements and postures and a few breathing exercises. Odds are that very little really changed or improved in your life.

Or maybe you took classes in Tae Kwon Do or Karate as a kid but all you remember is a lot of kicking, punching and sweating while screaming “Yes sir” and bowing a lot. That was my case. I had studied martial arts for several years as a teenager at what I thought were pretty good schools, but it did little to impact the development of my wisdom, compassion or spiritual awareness.

Then I had the chance to study authentic Shaolin Kung Fu, Tai Chi, Internal Martial Arts, and Zen Meditation with some of the most highly esteemed teachers in the country. It totally changed my training and my life.

The majority of martial arts schools or fitness centers today, unfortunately, have lost the traditional teachings—rooted in Zen Meditation, the Chinese philosophies of Taoism and Confucianism—that go along with the physical exercises. Without these teachings, it’s nearly impossible to achieve the mental and spiritual growth that can help you achieve lasting peace and happiness in life. 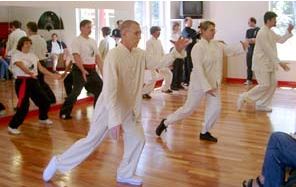 While most Charlotte-area fitness centers and even most Charlotte martial arts schools don’t emphasize these traditional teachings, at The Peaceful Dragon we view them as essential. 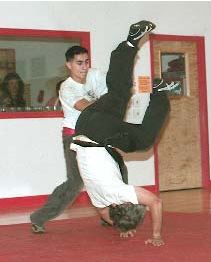 Fancy kicks, acrobatics, gymnastics and flowery movements have nothing to do with real self-defense. What matters are practical and direct strikes, joint submissions and throws executed with speed and power, and a complete understanding of the weak points and vital targets on an opponent.

Beyond even the physical techniques and movements, real street self-defense requires proper mental preparation and the development of a “survival” mindset.

Even though I had trained in martial arts for several years, I hadn’t realized how mentally or physically unprepared I was to defend myself in a true life-or-death street situation. Until, that is, I began training in my current system. Now, almost 40 years later, I continue to practice and refine the combat and self-defense skills I learned and I teach them in their entirety to my students at The Peaceful Dragon.

I make a clear distinction between sport competition such as light or full-contact sparring tournaments, and street self-defense. In my mind both have value and I teach both, but you need to remember that they’re two different things. Competition has rules, the street has only one rule: Do whatever it takes to survive.

Our classes in Shaolin Kung Fu and Shuai Chiao (Chinese grappling and mixed martial arts) will be great for you if your goals include getting into the best physical shape of your life, developing top-notch self-defense and combat skills, learning strategies for awareness and self-protection, and developing the superior confidence, discipline, bravery and wisdom that traditional martial arts are known for.

Interestingly, most of our students who take our kung fu classes also take advantage of the tai chi and meditation classes we offer. Not only will those classes give you the many health and spiritual benefits listed above, but they’ll also help make you a considerably better martial artist.

“The most special thing about The Peaceful Dragon is the lineage. The courses are passed down, not just what some instructor made up.” –Wayne Tvedt, Programmer

“The classes here provide me with stress relief, temper control, better balance, and more relaxation. My Tai Chi practice has become a part of my lifestyle. This is the first martial arts instruction in which I feel the instructor holds real and deep understanding. The instruction is rooted in the real Tai Chi, not watered down ‘just for Americans’ or a type that is solely based on being a successful business. Everyone comes to learn, both advanced and beginner students. Egos are left at the door. More advanced students are always willing to help newer students.” –Russell White, 38, Engineer/President, Charlotte, NC

“The classes at The Peaceful Dragon, while demanding, are fitted to accommodate one’s age and state of health. We strive to push ourselves, but are free to take care of ourselves in the process.” –Stuart Edmondson, 54, Engineer, Charlotte, NC

Master Sbarge was inducted into the United States Martial Arts Hall of Fame as Outstanding Kung Fu Master in 2005.

He began his martial arts training in Japanese styles, and for nearly 40 years he has practiced the Chinese martial arts styles of Shaolin kung fu, shuai chiao grappling, kenpo, tai chi and the related internal martial arts of pakua and hsing-i.

Master Sbarge has been featured on Charlotte Talks with Mike Collins on WFAE radio, Fox TV, WCNC TV, and other stations, as well as The Chicago Tribune, Charlotte Observer, and numerous other magazines and newspapers.

He has published dozens of articles on martial arts and related topics in such leading magazines as Black Belt and Inside Kung Fu, and he has assisted in the production of numerous books and videos on tai chi and Chinese martial arts. He competed in open martial arts tournaments for many years in New York and frequently took first place at the advanced black belt level in forms, fighting and weapons divisions.

He has been a featured speaker or presenter at dozens of national and regional companies and organizations including B.F. Goodrich, Johnson and Wales University, UNCC, Discovery Place, the FBI, the U.S. Army, Wachovia, Bank of America, the Charlotte Asian Chamber of Commerce, Charlotte-Mecklenburg Schools, International House, Blumenthal Performing Arts Center, and many more.

Master Sbarge holds B.A. and M.A. degrees in economics and media studies, and is a certified secondary school teacher with a concentration in Asian culture and history. Master Sbarge complements his genuine expertise in the arts he teaches with equal expertise in teaching, communicating and motivating students to achieve their highest potential.

(Learn about other Peaceful Dragon Instructors.)

“The Peaceful Dragon’s instructors have a thorough knowledge of the martial and meditative aspects of the arts and teach without egotism or show. The curriculum is a full system of physical and spiritual fitness. The students are fun people to spend time with too.” ~ Beth Rudowske, Copy Editor, Rock Hill, SC

“I lost 50 pounds during the first six months of starting classes at The Peaceful Dragon. I am stronger, more confident and healthier at 33 than I was at 23. My mind is calmer and my focus at work is much sharper.” ~ Frank Tippet, Bond Investor, Charlotte, NC

“Master Sbarge is very knowledgeable in the arts. The curriculum is comprehensive and challenging and a joy to learn. The instructors are great.” ~ Dale Guadagna, Charlotte, NC, Solutions Development