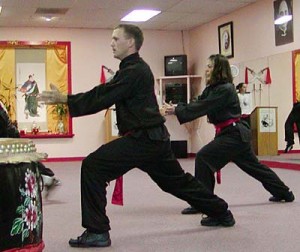 More than 1500 years ago, the Shaolin monks in China began studying martial arts as part of a lifelong journey towards enlightenment. Recognizing that body, mind, and spirit are inseparable, they embarked on three pillars of training. This training included martial arts and qigong to strengthen the body, meditation to clear the mind, and spiritual inquiry to answer the deepest questions of the soul.

At The Peaceful Dragon in Charlotte, we adhere to the traditional “three pillars” approach, teaching authentic lineage kungfu styles. The journey is a demanding one requiring self-discipline and dedication, but the rewards are always worth the effort.

Originating in the Shaolin Temple in China over 1500 years ago, Shaolin kungfu is perhaps the most comprehensive of all martial arts. Often referred to as the “granddaddy” of Asian martial arts, Shaolin has influenced the development of much later arts such as Japanese karate and Korean tae kwon do. Kungfu offers you great health and fitness, superb fighting skills, and it can be beautiful and exciting to watch, as in the movie “Crouching Tiger, Hidden Dragon.”

“The curriculum here is diversified. It offers something for any age or type of person. The instructors treat every student with respect and help the student reach the highest level of martial arts they are capable of.”
Frank Tippett, Bond investor

The oldest recorded martial art in East Asia, Shuai Chiao dates back more than 2500 years to the time of the Yellow Emperor.

With emphasis on grappling, throws and sweeps, Shuai Chiao offers a devastating arsenal of real combat techniques for the martial arts enthusiast.

Though not for the faint-of-heart or for people in poor physical condition, Shaui Chiao is the perfect complement for stylists of “stand-up” fighting styles such as Shaolin kungfu, karate, tae kwon do or boxing.

“The Peaceful Dragon’s authenticity is what I feel is very important and it is more real than any other martial art schools”
Jonathan Wright, Student

We motivate our students to strive to reach their full potential in all aspects of their lives. Like all traditional Chinese schools, our adult programs have no “belt rankings” or other competitive grading systems; the only test is whether you’ve made a little more progress today than you did yesterday. We look at martial arts mastery as a lifelong process and aim to help you build a strong foundation for optimal progress.

“The Peaceful Dragon’s instructors have a thorough knowledge of the martial and meditative aspects of the arts and teach without egotism or show. The curriculum is a full system of physical and spiritual fitness. The students are fun people to spend time with too.” ~ Beth Rudowske, Copy Editor, Rock Hill, SC

“I lost 50 pounds during the first six months of starting classes at The Peaceful Dragon. I am stronger, more confident and healthier at 33 than I was at 23. My mind is calmer and my focus at work is much sharper.” ~ Frank Tippet, Bond Investor, Charlotte, NC

“Master Sbarge is very knowledgeable in the arts. The curriculum is comprehensive and challenging and a joy to learn. The instructors are great.” ~ Dale Guadagna, Charlotte, NC, Solutions Development