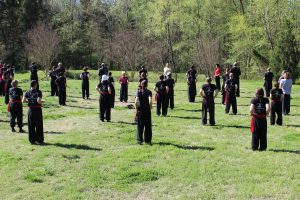 While tai chi is actually an ancient Chinese martial art, one of its main objectives is to improve the health of its participants, both physically and mentally. Unlike other martial arts, with tai chi the slow, meditative movements are accessible to everyone.

1. Increased Strength: A recent study shows that six months of regular tai chi classes results in a quantifiable increase in physical strength. In fact, those who participated in tai chi became twice as likely to experience little to no difficulty in completing most strenuous physical activities.

But it’s not just for people who are already physically strong – the study showed that those who started off at the weakest point enjoyed the most benefits. Tai chi has also been proven to improve a person’s balance and decrease the instances of falls, especially among the elderly.

2. Diminished Pain: Muscle pain and soreness is markedly diminished in regular participants of the martial art of tai chi. Patients who had been suffering from osteoarthritis were tested over the course of three months. The ones who began to participate in tai chi in Charlotte reported feeling much less pain than when they had begun.

Joint pain is decreased and the muscles are able to respond to the workout much more easily, while muscle stiffness is lessened.

Two out of every three people who began a tai chi martial arts class in Charlotte have reported that they are currently sleeping better than when they began. These benefits have been compared favorably with those gained through the usage of prescription drugs.

4. Improved Walking Speed: It is only natural for walking speed to decrease as one ages due to a person’s increased susceptibility to falling. But, with tai chi classes, a person’s balance improves, reducing the risk of falling. As such, they are then able to walk at a much faster pace.

With increased walking speed comes reduced risk of diabetes and other chronic forms of illness, so it’s certainly worth the effort you will put in.

5. Stress Relief: Life can be stressful for anyone, regardless of their age. Tai chi martial arts harness this stress by focusing in on movement and proper breathing techniques. By participating in tai chi, it allows the body and mind to take a much-needed break from the usual stresses of life.

Tai chi emphasizes the connection between a person’s body and mind. With increased body movement comes an inflated sense of calm. Tai chi has been recommended by many fitness experts because it promotes a sense of peace in participants.

If you would like to know how tai chi martial arts in Charlotte can help you – call us today to schedule an appointment to discuss your goals!