Karate vs. Kung Fu. What is the difference? How is a parent to choose?

If you’re looking for a children’s Karate class in Charlotte, you’re finding a long list of choices across a variety of martial arts disciplines. Children’s martial arts covers a large array of styles. For children, Karate and Kung Fu are the most popular choices. But what is the difference between the two, and how can a parent make the best choice for their child? 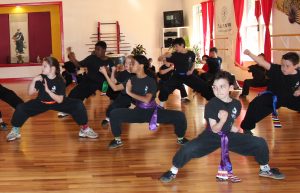 Karate and Kung Fu will look different, visually speaking. If you walk into a studio for either discipline, you can observe some clear differences.

Uniforms: Kung Fu uniforms feature a variety of colors, their tops feature frog buttons, and they wear a colored sash based on skill level.  Karate uniforms are usually a white jacket and pants with a colored belt according to skill level.

Karate was developed in Japan. The term means “empty hand” in Japanese for the weaponless style of fighting. It started with a martial arts practice centered around hand movements, call “te,” but was later influenced by Chinese martial arts.

Kung Fu is an ancient Chinese martial arts form originating with the Shaolin monks over 1,500 years ago. They focus on the inseparable connection between the mind, body, and spirit. Therefore practice includes physical (martial arts and qigong), mental (meditation), and spiritual components.

Both disciplines include kicking, punching, and defensive maneuvers with both the arms and legs, with emphasis on controlling each movement to focus power and efficacy. Both martial arts also focus on self-discipline, traditions, costumes, rituals, and mental attitude.

How to Choose Between Children’s Karate & Kung Fu

While we can be very biased and tell you to choose Kung Fu, the reality is that it is a personal choice.

We highly recommend you find recommended dojos in your area and inquire about a free introductory class. This trial class will help you meet instructors, understand what the atmosphere and community are like, and see what is involved in the actual martial arts movements themselves. Don’t stop at one. Make sure you visit both a Charlotte Children’s Karate studio and a Kung Fu studio before deciding.

Read our popular story How to Choose a Studio, Instructor and Karate Classes for Kids for more details about making this important decision for your child.