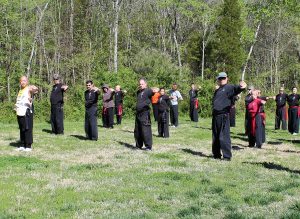 Tai Chi is also known as Tai Chi Chuan or Taijiquan. Built within the name itself is the idea of balance. Starting with the internal balance between the mind and body. Then outwardly, as you use those skills to study and affect your opponent.

Today, Tai Chi is mainly practiced for increased health and wellness. It is known for its accessibility as people of varying abilities benefit from better stress management, improved focus, increased physical health, and more.

The foundation of Tai Chi is the thirteen postures. The postures are comprised of 8 tai chi gates (energies) and 5 steps.

The eight gates of tai chi are

When practiced with a partner as in push-hands, the gates are utilized to determine the intensity and direction of the opponent’s force to properly counteract it by adjusting actions accordingly. The reaction to their reaction is how to maintain an advantageous position against an opponent if it were an actual physical conflict.

While Tai Chi is a gentle, meditative practice, it is, in fact, extremely valuable in self-defense and combat. The practitioner becomes sensitive to the energy of their opponent and maintains complete control over the body and mind for precise and appropriate responses that are most effective.

Practicing Tai Chi for good health and better stress management are why most people take Tai Chi classes, but if you want to improve your self-defense and combat skills, adding Tai Chi to the mix is beneficial.