At The Peaceful Dragon, we encourage all of our martial arts students to periodically enter and compete in competitions. Whether they are a beginner, intermediate or advanced, and at any age, experiencing martial arts talent from other schools while sharing your progress with a large group of like-minded peers is a singular experience. 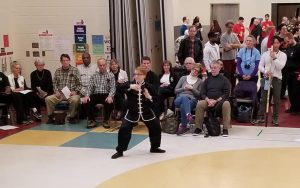 As we return to the normal schedule after spending Saturday at the Queen Charlotte’s Cup, hosted by Carolina’s Association of Chinese Martial Arts, it is a great time to reflect on the experience. Each time we go to any event, we get to witness the awe in the eyes of the first-timers, the pride in the eyes of those who reach their goals, and the friendships that are created or renewed among peers.

This year’s Queen Charlotte’s Cup has moved around due to some logistical issues and we were stuffed into a smaller area than we would have liked. The Bain Elementary school gym and cafeteria combination space provided a very nice venue in the heart of Mint Hill, but once everyone arrived, it was just a bit crowded. Did that stop us? Not one bit. We opened the doors to let some cool air in and made it work!

A particularly enjoyable moment was after a beginner group performed their hand forms. I witnessed the child who won 1st place introduce himself to his 2nd place competition. The children congratulated each other, discussed how long they’ve been practicing Kung Fu, and proceeded to go outside into the courtyard together to share tricks and tips on their forms. This particular kindness, I am pleased to say is not an uncommon occurrence among Kung Fu tournaments and just another reason we encourage all our Martial Arts students to give it a try.

In fact, many competitors from various Kwoons and Dojos could be found helping each other warm-up before the tournament began. And even in the fiercest sparring matches, opponents helped each other up off the mats.

Did I mention how fun it is? Tournaments are just plain fun. Where else can you go to practice what you love, compete in an environment of great mutual respect, and watch others share their skills?

If you’re curious about Martial Arts and preparing to enjoy a tournament in the future, we recommend you start with our free no obligation tour and introductory class. Call today to schedule 704-504-8866 or sign up here.